What Are They?
A bunion is the lay term for hallux valgus, or deviation of the great toe. The deformity is complex and involves the big toe long bone (metatarsal) to deviate away (inward) from the second toe and the big toe itself to deviate outward, toward the second toe. Due to this movement, a prominence on the inside of the foot (the ‘bunion’) occurs and can cause symptoms. Contrary to popular belief, it is not a new growth of bone.

What Causes Them?
There are a number of causes including genetics, foot wear (high heels, narrow toe box), family history and inflammatory joint disorders (eg rheumatoid arthritis). Other causes have been implicated such as flat feet and lax ligaments.

What Are The Symptoms?
Most commonly pain around the bunion when wearing closed foot wear and a deformity that may get worse over time. Pain may also be experienced under the balls of the toes (metatarsalgia) or in the big toe joint. Normally wearing sandals or no shoes, relieves symptoms. Some patients with bunions have no symptoms at all.

Will It Get Worse?
Progression of the deformity usually occurs, but over what time period is difficult to predict. This can take years.

What Is The Treatment?
If you have no discomfort or pain, then you do not need to do anything. If you have symptoms, there are a number of non surgical options you should try, before considering surgery:

Modify or change your foot wear – The most important thing to do. A soft, wider shoe, with a small heel, which accommodates the foot well. Using a shoe stretcher, your current shoes may be made to fit.

Bunion Pads–Often made from silicon rubber, these protect the prominent area from rubbing.

Silicon Spacers– These can prevent toes rubbing if placed between the first and second toes.

Surgery.–If non surgical options fail to resolve symptoms, then surgery can be considered.

What Does Surgery Involve?
This will depend on the nature of the deformity you have. Mild, moderate and sometimes severe deformities can be corrected by an operation which involves releasing the tight tissues, cutting the big toe long bone (metatarsal osteotomy), shifting it back to its original position, then fixing it with 2 or 3 screws. Sometimes severe deformities or those with arthritis are better served with a fusion of the big toe joint. The operation can be performed as a Day Case procedure, under a local anaesthetic ankle block, making the whole foot numb for 6-12 hours. You can be awake, sedated or have a general anaesthetic during surgery, which takes about 45 minutes. Most patients do not experience significant pain after surgery with the modern techniques Mr Gordon uses.

What is Minimally Invasive (Keyhole) Surgery?
This is the standard technique Mr Gordon uses and most patients are suitable. The bunion correction is performed through 3 or 4 very small incisions, only 3-4 millimeters long. This is in contrast to traditional surgery performed through large cuts on the foot. Mr Gordon offers this technique to private patients at The London Clinic, Spire Bushey Hospital, North London and Spire Harpenden Hospital, Hertfordshire. 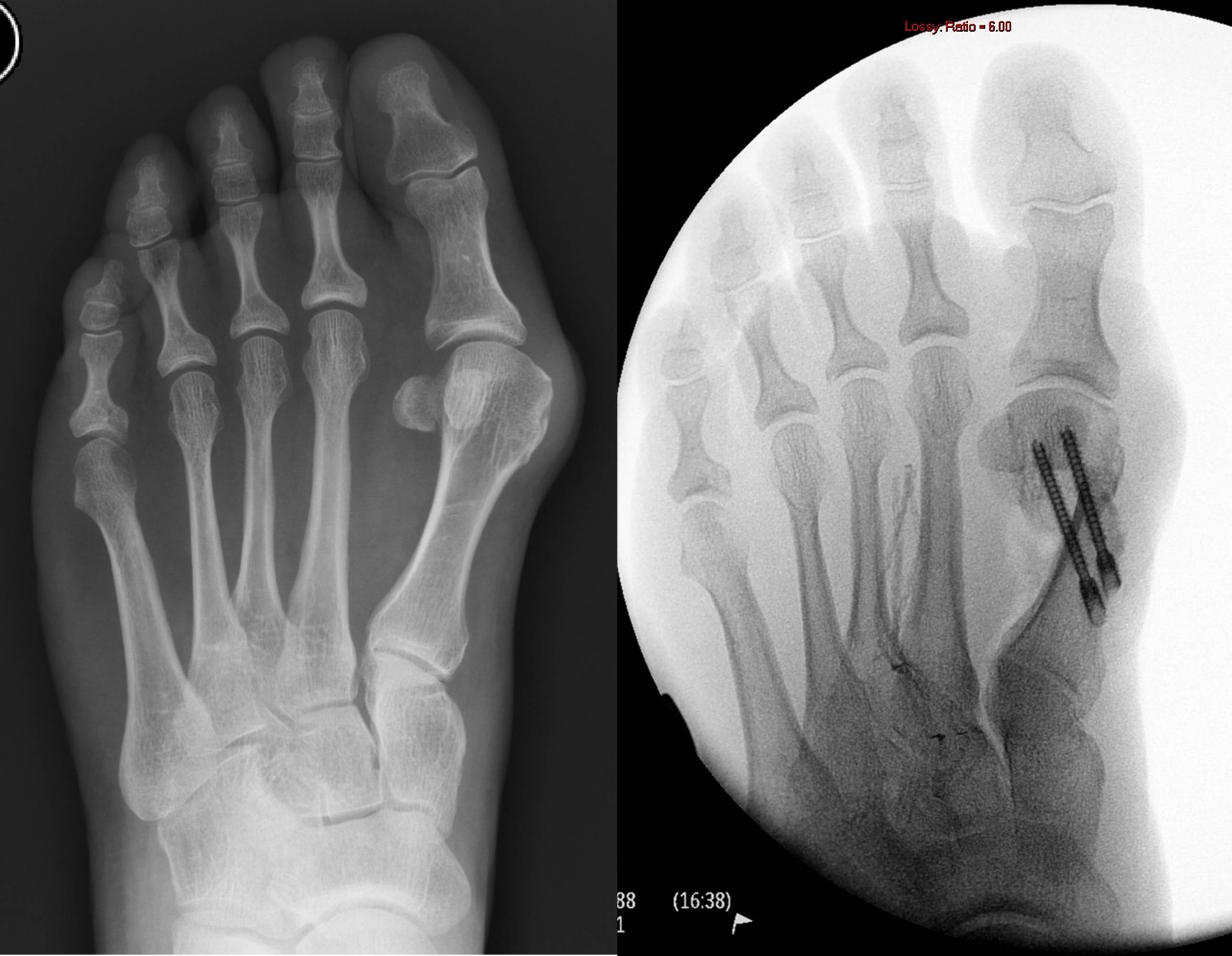 What Are the Advantages of Minimally Invasive Bunion Correction Over Open Surgery?

As smaller incisions are made, much less soft tissue stripping is required to gain access to the bone in order to make the bony corrections. This may lead to:

Due to Mr Gordon's extensive experience with minimally invasive bunion surgery, he no longer performs the open technique. However, open surgery is still a successful operation but has some drawbacks. 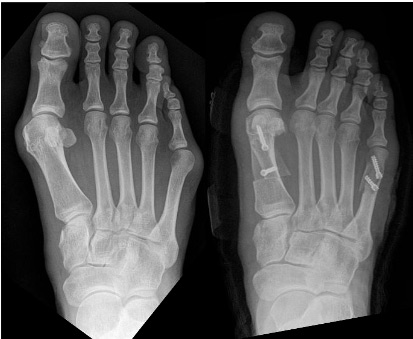 What Happens After Surgery?

What Are The Risks Of Bunion Correction Surgery?
Although most surgery is complication free, there are risks involved. Below lists the most common first.
Stiffness of the big toe joint–It is likely you will loose some movement long term with open surgery, however with Minimally Invasive Surgery, this is much less likely. By following Mr Gordon’s evidence based Hallux Valgus Surgery Post Operative Rehabilitation Guide, stiffness can be minimised.
Swelling–Your foot will remain swollen for 6 months to 1 year after surgery, but will eventually resolve. It is important to elevate your foot as per Mr Gordon’s post operative instructions, to minimise this. You will not be able to get into your normal shoes until 4-6 weeks after surgery and even then, they may need to be loosened.
Nerve injury–This may lead to a permanent numb area on the toe which is not painful.
Infection–Despite thorough cleaning before surgery and antibiotics, wound redness and pain may occur, although uncommon. This should be dealt with urgently.
Under correction–Sometimes the deformity is not corrected to your satisfaction, eg. not straight enough. This rarely requires further intervention.
Over correction–Rare, but problematic and may need further surgery.